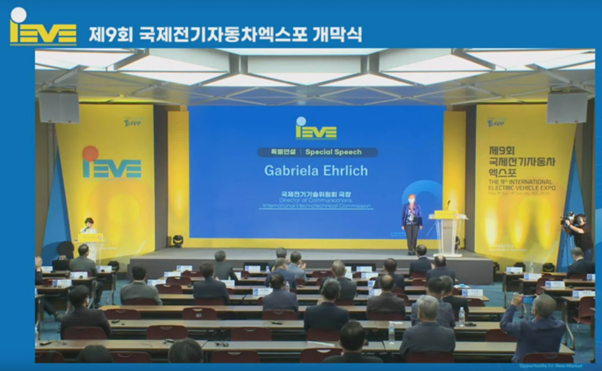 The IEC recently participated in the 9th International Electric Vehicle Expo (IEVE) which took place in Jeju, South Korea in early May. Representing the IEC, Gabriela Ehrlich provided a keynote address about the role of standards in the electrification of transport. Other speakers included Ban Ki-moon, the former UN Secretary General, Wi Sung-gan, member of the National Assembly, and Nathan Chang, Executive Vice President of Samsung.

According to Ehrlich, the electrification of transport began in 1881 when Gustave Trouvé presented the first electric vehicle which consisted of a bicycle with 3 wheels. “In 1900, one-third of all road vehicles in New York City were electric. People clearly liked the electric automobile, because it was superior to its gas competitors which were smelly, noisy and vibrated a lot. And electric vehicles were also much easier to operate. Over the next few years, delivery vehicles, trucks and buses were also electrified,” Ehrlich notes.

Transport currently accounts for 25% of total carbon emissions in the world, making it the 2nd largest carbon emitter. Compared with 1990, the transport sector has increased its carbon emissions by nearly 80%.

However, as Ehrlich remarks, “Electric vehicles, now more than ever, hold the key to decarbonizing the transport sector. They are several times more efficient at converting energy into propulsion than gasoline or diesel combustion engines, and they are clean at the point of use.”

Making transport more sustainable will be essential to achieving six of the 17 Sustainable Development Goals (SDGs) defined by the United Nations in its blueprint for building a better world by 2030. The electrification of transport will not only include cars, but also ships, trains, and other vehicles that use fossil fuels as an energy source.

Ehrlich gave the example of Norway where the deployment of electric cars and ships has reduced transport-related emissions by more than 29% since 2012. 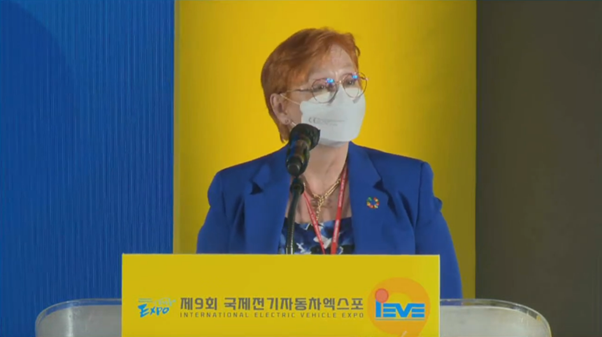 Technology has a key role in helping to make transport more sustainable. In her presentation, Ehrlich provided an overview of four technology areas that can enable the goal of sustainable transport:

According to Ehrlich, “International standards from the IEC, ISO and ITU play a key role in promoting and deploying technology innovations in all four key areas of sustainable transport. Other standards organizations such as SAE, ETSI, or IEEE also contribute important standards in these areas.”

Given the role of the IEC in the standardization of electric, electronic and ICT technologies, the IEC will be key in developing standards for future sustainable transport systems. Standards are be needed in areas such as batteries, fuel cell technology as well as charging and discharging technologies. As Ehrlich notes, “The innovation and broad commercialization of electric vehicle technologies directly depends on the standardization and conformity assessment work within the IEC.”

The electrification of the transport sector is closely linked with the smart grid and, by implication, with the smart city as it will need to be integrated with the grid to become sustainable. Several IEC technical committees have developed the foundation for the integration of transportation within energy systems. “Such work is crucial for the acceleration of the global deployment of sustainable transportation systems,” concludes Ehrlich.

Designing the standards that cities need

Hydrogen is in the air